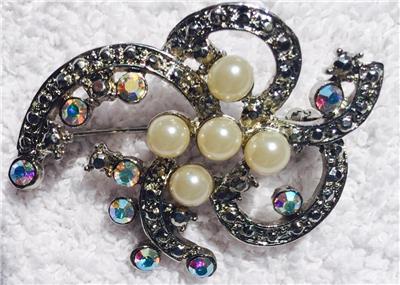 Marcasite has been used in jewelry as early as the 1700’s as a substitute for diamonds. Marcasite waned in popularity in the late 1800’s, but a resurgence of marcasite happened in the 1920’s. In the 1920’s and 30’s, women could add glitz and glitter to their life through the shimmering of marcasite, at a lower cost than buying diamonds. Today marcasite jewelry has become highly collectible, and much more difficult to find, and is quickly escalating in price due to popularity and scarcity. The stone known as marcasite is actually pyrite. There is a mineral named marcasite but it is not suitable for jewelry. The sulfite, pyrite is cut into small faceted pieces, and marcasite is created. The light reflecting off the facets, create a sparkle. Marcasite is always placed in silver jewelry. You can find it in bracelets, earrings, necklaces and rings. Marcasite is quickly escalating in price and demand.